Mannheim CTR (HX) is a class D airspace from ground to 2000 ft MSL. 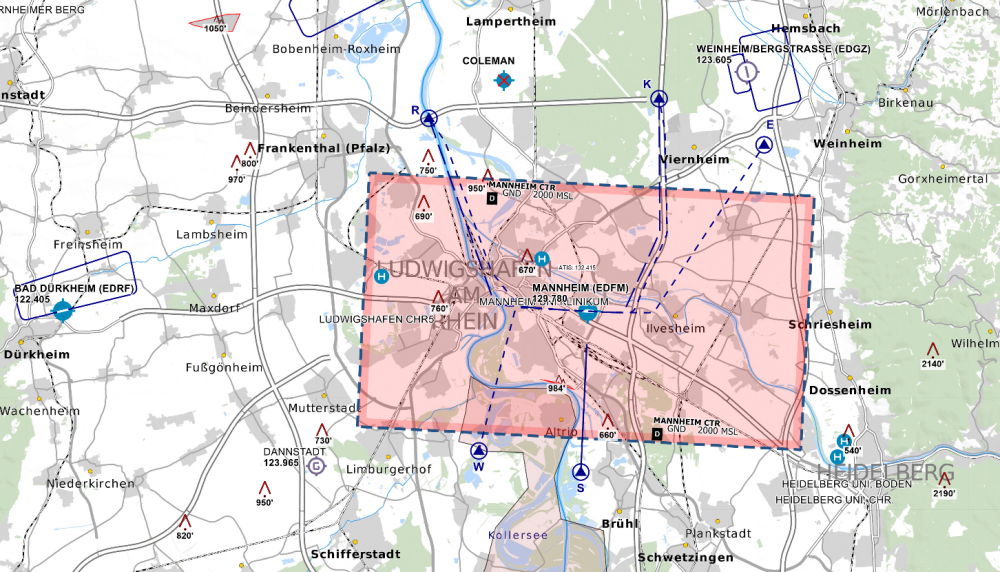 Only the following aircraft are allowed to land at Mannheim City Airport:

On the hard surface RWY:

On the grass RWY:

Prefered parking for Airlines are the two taxi-out positions in front of the Terminal. Other aircraft can be parked either at the positions 1 - 5, the hangars or at the grass area. For refueling the gas station east of taxiway A is used.

Leaving CTR via the following routings:

Entering CTR via the following routings:

Traffic Pattern: Due to noise abatement reasons the southern traffic pattern is prefered and should be used as often as practical. VFR traffic should not overfly the city of Mannheim, Ludwigshafen and the surrounding villages. Additionally there are 3 hospitals with helicopter landing sites W/NW of the airport (see VFR Chart for details).

All IFR departures will get one of the SIDs out of Mannheim. Prior takeoff clearance a departure release by Langen Radar is required for all IFR flights.

All departures shall be separated by radar separation or wake turbulence separation, whichever is greater. Departures flying the same SID shall be spaced by at least 5NM when the following aircraft overflies the departure end of runway.

Mannheim City Airport has a non-standard 3,7° degrees approach path for RWY 27. Only for this runway published approaches (LOC, RNAV/RNP) are available. If the tailwind for RWY 27 is too high, RWY 09 is only available with a circle to land south of the field.

For all IFR or SVFR landings at RWY 27 a minimum ground visibility of 1800 m is required.