The first station to be occupied on CTR is Hersfeld (EDGG_E_CTR). The exact overview over the sector and sector splits can be found here.

Inbounds to EBBR have to reach Fl250 at DEVRU before being transfered to the CTR responsible of EDLL.

Note: For inbounds to ELLX EDGG_E_CTR has to clear STARs according to the LoA document. In general the STAR that has to be cleared is the first entry in Euroscope.

The Graphical LoA is used to visualize the LoAs and is no substitude for the written from. Aircraft transfered from CTR to EDDF_APP oder EDDS_APP are released for turns but not for climb/descend.

EDDS_APP clears the used Transitions/STARs himself. The transfer level is published in the Quicksheet. When using the CDA Transitions EDDS_APP has to coordiinate directs and the used Transition with CTR. On handoff from CTR to APP aircraft are released for turns but not for climb/descend as long as they are inside CTR airspace.

Most traffic to EDDF will enter via SPESA. Therefor SPESA holds the most conflict potential in the entire airspace.

The main problem is that at SPESA traffic from EDMM and LSAS has to be merged. Additionally CINDY and SULUS departures pass within 7NM to SPESA. Traffic from EDMM should be told to reach FL110 at SPESA which leaves conflict potential with SPESA inbounds from the south.

In case of an EMPAX arrival from the south the instruction: "descend via EMPAX3W/EMPAX3E FL100" should be used. In this case the pilot will descend to reach FL100 at ADNIS. This prevents potential conflicts with CINDY/SULUS departures, aswell as conflicts over SPESA between traffic from EDMM and from LSAS 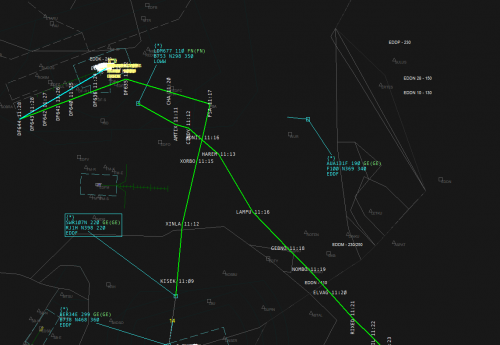 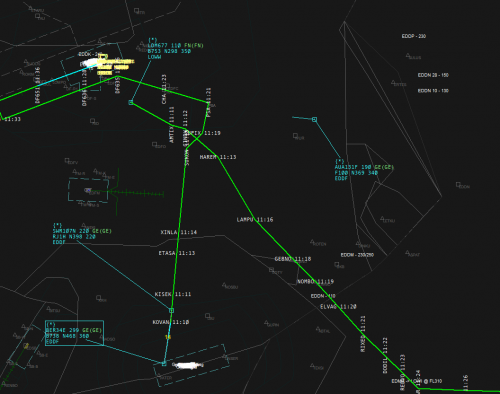 In the case of this picture BER34E descending to reach FL100 is at about FL135 when crossing the CINDY departure LDM677. Therefor every CINDY departure unknown to the CTR controler is a cleared conflict with SPESA arrivals from the south.